Homemade greeting cards made from fabric

Pin It
As promised, I had another play with the pink DCWV Fabric Paper stack, and this is what I came up with: 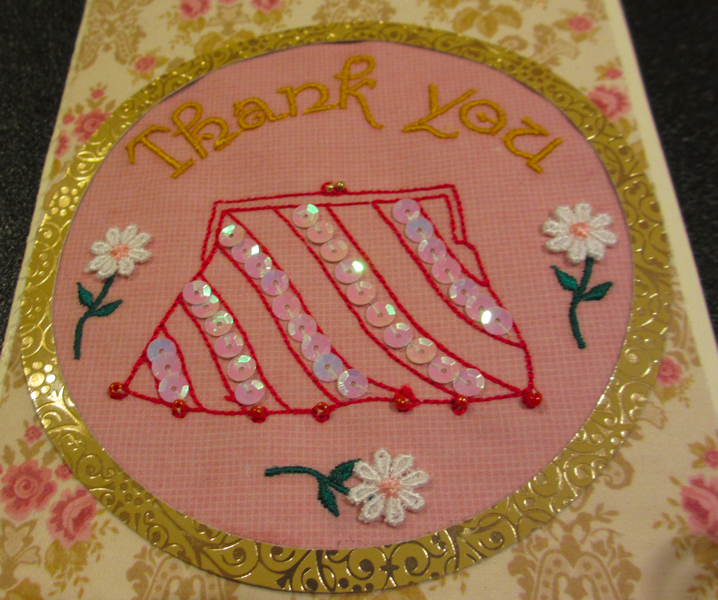 To begin, I attached some stabilizer to an embroidery hoop. Then I spray-glued the DCWV fabric (with the adhesive backing still on) and attached it to the stabilized hoop.

The results were great and everything stayed flat and smooth. There were no problems with embroidering either. Note that the first embroidery included embroidered roses around the bag.

The second embroidery was basically the same as the first except that instead of leaving the DCWV backing on the fabric, I took it off and attached the fabric directly onto the stabilizer.

There were no problems at first, but then the thread broke four or five times and the fabric puckered (just a little), so the overall result was not as good as the first.

I think the glue in the adhesive on the fabric was the reason for the thread breaks. The embroidery could still be used but… we can do better. 😉

Second Attempt: Look underneath the "You" for slight puckering

For the third and final attempt, I left the backing on the DCWV fabric and spay-glued the backing to the hoop and stabilizer.  I then stitched out the pattern except for the buds on the flowers so that I could add my own 3d flowers where the buds would have been.

Once again I had no problems with puckering or thread break.

I added some Blue Moon Seed Beads (along the bottom), a couple of gold beads (for the purse snaps) and for added fun I sewed some sequins on the purse (in stripes).

The card was made with cream card stock cut at 7″ x 10″ and scored at 5 inches. Next I cut some contrasting fabric from the DCWV fabric stack at  4 3/4″ x 6 3/4″, then peeled the backing and just stuck it to the card stock.

I had a lot of fun making this card and will definitely have a go at making some different embroidered cards.

Don’t forget to drop me a line if you have a go at making some cards, I would love to see!

EDIT: This is Nicky’s husband.

When Blue showed me the finished product, I went nuts over it. It was such a substantial step up from any other card I’ve ever seen that I suggested she stamp the back as “Handmade by BlueBrit” and sell them as a product. These are very cool, and I’ll be asking her to make some for me when I have a very special thank you to express to someone.

I now return you back to your regularly scheduled blogger. 🙂

A crafter’s tribute to the 2012 London Olympics

How to make your own gift card boxes